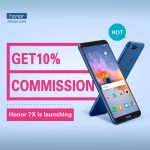 Hello Affiliates, Our last Smartphone Honor 6X has an great performance in Amazon,  and it’s the No.1 sellers under amazon unlocked cell phones catalogue.   Honor 7X , the upgrade of honor 6X, launches exclusively in our official website store.hihonor.com/us. It is a great opportunity to earn much from Honor 7X which is the unrivaled phone of 2018. Honor is a sub-brand belonging to networking and telecommunications equipment and services company Huawei. the Honor series of mobile computing devices include smartphones, tablet computers, and wearable technology. The company began its international expansion in 2014. In April 2014, it launched the Honor 3C in Malaysia,and it entered the European market in October 2014, with an announcement in Berlin. Its first flagship phone for Europe was the Honor 6. 20 million Honor phones were sold within the first six months of 2015, equal to the number sold in all of 2014. The brand had expanded into 74 countries, including USA, European nations, India, and Japan.

Please feel free to get in touch with us if you have any questions, or if you would like to provide feedback on the program. We would love to discuss the campaign with you. Team Email Address: tengteng3@huawei.com. We look forward to welcoming you onto the program! SIGN UP NOW     Many thanks The Honor Smartphone affiliate team